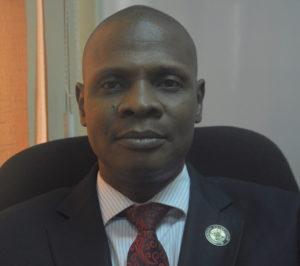 He started his education sojourn from St. Jude’s Anglican primary school freeman street, Ebute Meta (East) between 1977 and 1983. He had his secondary education at Denton Grammar School, Denton Street, Ebute Metta from 1983 to 1988. Thereafter, he attended Ogun state polytechnic (Now Moshood Abiola poly) between 1993 and 1995 where he obtained National Diploma (ND) in Accountancy. He went Lagos State Polytechnic, Isolo for is Higher National Diploma (HND) in Accountancy from 1997-2000.

Amongst the various Ministries Departments & Agencies, he has worked are; Ministry of finance (2001-2003), Commerce and Industries (2003-2006), Lagos State Waterfront Development Corporation (2006-May 2007), Ministry of Waterfront Infrastructure Development (June 2007-May 2009 as a pioneer Internal Auditor). He was deployed to Office of the Chief of Staff in April 2012, on GL12, Principal Executive officer (Audit). He acted as the assistant to the then Internal Auditor until November, 2015. He then became the Internal Auditor after the retirement of the Auditor.

Furtherance to acquisition of knowledge, he attended Nigeria college of Accountancy, Jos, Plateau state (Part time) between 2014 and 2016 where he sat and passed the necessary examinations and become the certified member of ANAN. This qualification led to his conversion from executive cadre to Professional cadre effective from April 2019 as the chief Auditor on GL.14.

In the course of his duties in the office of The Chief of Staff he received letters of commendation in year 2015, 2016 and 2017 respectively.

Mr. Badejo is married with children.